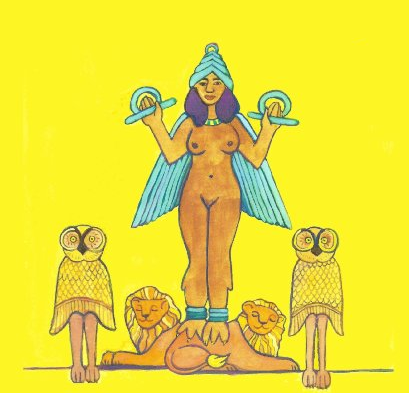 On August 10, the first three books of the Brief, Complete Herstory series will be available for purchase. This is what the whole series will look like when it's ready (minus Book 1, which you can find on the Homepage and Shop). Below the image is a summary of each book's contents - you can also find a small selection of artworks at the Instagram handle @dragoncloudpress. I look forward to sharing this project with you!

Book 1, Mother Earth and Sea, explores human origins and the evolution of life on earth, from the Big Bang to sea life, land animals and early humans, from a critical and feminist perspective. The story emphasises the relationship of evolution and reproduction, and it functions as an illustrated introduction to feminist herstory, spirituality and biology.

Book 3, God, explores the woman-centred cultures of Old Europe through the eyes of feminist archaeologist Marija Gimbutas. It then outlines the Indo-European conquests that introduced patriarchy to Europe, along with philosophical 'dualism.' God then examines church and state through the eyes of the powerful and overlooked nineteenth century feminist Matilda Joslyn Gage, who developed the radical critiques she laid out in her 1893 book Woman, Church and State with the aid of indigenous Haudenosaunee women. Book 3 then travels through the Middle Ages, witchcraze, and the Arabic scientific innovations that fuelled the European Renaissance. On the way, we meet the lesbian poet Sappho; Boudica, the Celtic queen and priestess who led an uprising against Rome, and some wonderful medieval mystics and Beguines - all depicted in original colour paintings.

Book 4, Capitalism, begins with the Protestant Reformation, which set up the philosophical basis for capitalism. It then explores the slave trade, colonisation, industrial revolution and the emergence of factories, and the ways women fought for freedom from them all. We meet - in accessible text and colour illustrations - many important historic women, including Harriet Tubman, Sojourner Truth, and Abigail Adams, as well as contemporary authors such as Roxanne Dunbar-Ortiz (An Indigenous Peoples' History of the United States), Dorothy Roberts (Killing the Black Body: Race, Reproduction and the Meaning of Liberty) and Rebecca Hall (The Hidden History of Women-Led Slave Revolts). The book also offers a glimpse into some feminist debates about reformism versus anarchy, by introducing us to Buffalo Calf Road Woman, who fought the United States army; Emma Goldman, a legendary feminist anarchist, and Emmeline Pankhurst, a militant suffragist and reformist.

Book 5, Empire, looks at European territorial expansion in the nineteenth century, and how European powers attempted to divide up the world among themselves. It shows the buildup to World War I and II, through the eyes of critical and feminist writers like Rosa Luxemburg and Virginia Woolf, and discusses women's resistance to European colonisation as well as their critiques of nationalist movements. We meet Afghanistan's Malalai of Maiwand, Ghana's Yaa Asantewaa, Aotearoa New Zealand's Te Puea Herangi, and the Muslim feminist Begum Rokeya. Rokeya's 1905 short story Sultana’s Dream imagines the Islamic practice of purdah – women being forced to stay veiled and indoors – reversed.

Book 6, Resistance, outlines the major revolutionary and nationalist movements that took place throughout the twentieth century around the world, from India to Palestine, Cuba, Russia, China, South America, the United States, Iran, Egypt and the Pacific, and introduces readers to the women who participated in these movements and challenged their patriarchal structures. This book offers an alternate view of the rise of 'second wave' feminism, by showing how the consciousness raising groups and newsletters these women set up eventually developed into a sound and comprehensive political analysis and global women's movement.

Book 7, Neoliberalism, dispels the confusion about what exactly this political-economic phenomenon is - it explains neoliberalism clearly. We see how the revolutionary movements of the nineteenth and twentieth centuries caused trouble for profiteers in the United States, how neoliberalism became their solution, and what happened when it was introduced to South America, China, Africa, Asia and Europe. The book draws on Naomi Klein's The Shock Doctrine, and we also hear from women around the world who have participated in challenging the spread of neoliberalism, from Brazil, Chile and Argentina to Kenya, India and Thailand.